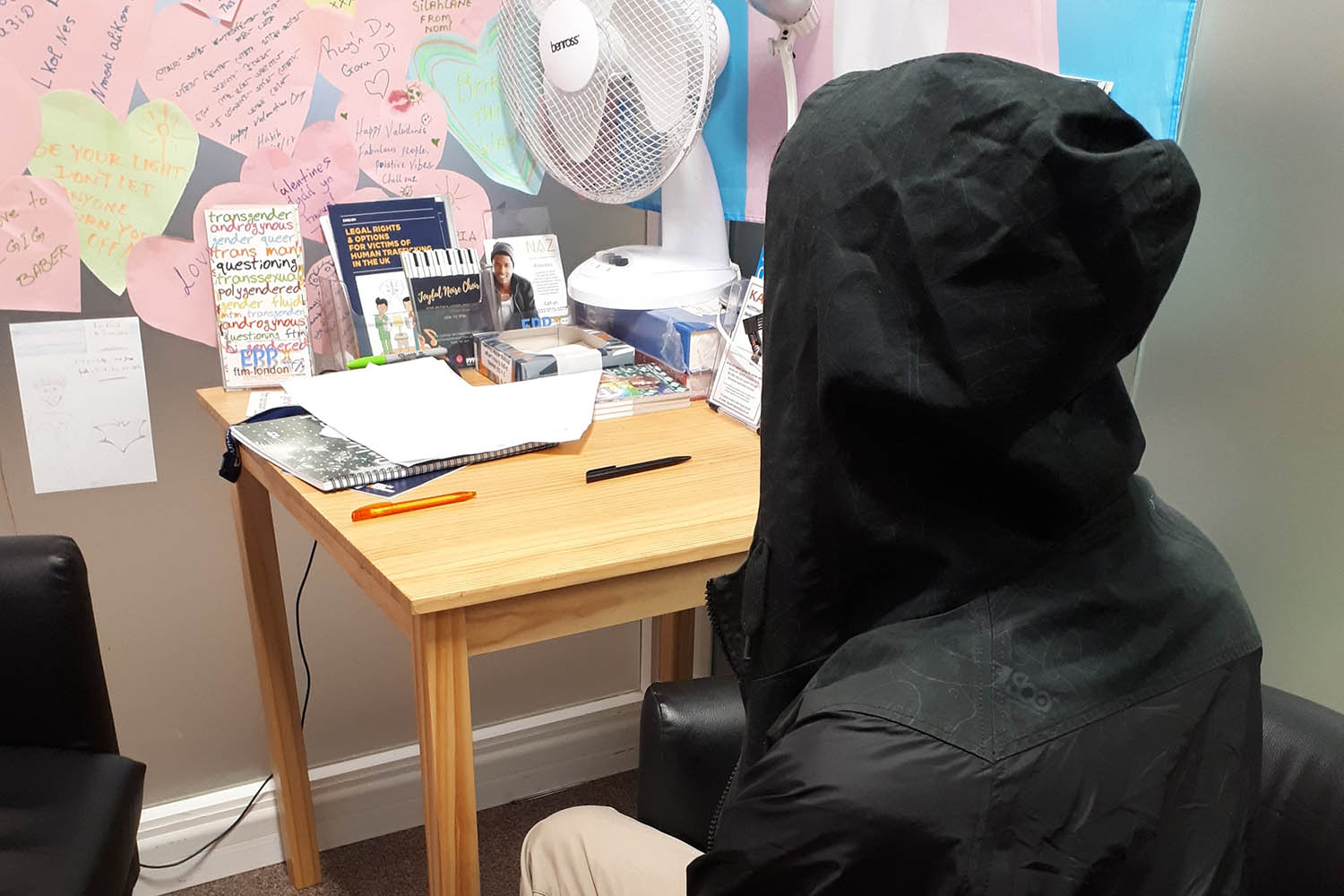 When Adam’s family in Algeria found out he was gay, they tried to force him to marry a female cousin.

“When my family discovered I was gay, it was like living in hell,” he says. “I made arrangement for the wedding but I escaped a few months before it took place.”

He arrived in Britain in 2003 and lived with another cousin. It was a difficult time and Adam felt very isolated and alone.

“I lost my mum a few months before I came to the UK,” he says. “She used to defend me so I suffered more after she was gone. We were very close and she accepted me. We never spoke about who I am, but she always protected me.”

In Britain, he felt he couldn’t tell his cousin what had happened and why he had to flee. “I suspected she knew I’m gay and she used to say that I could tell her anything if it was bothering me. But I was too scared she’d tell my family back home,” he says.

Adam stayed with his cousin for several years, babysitting, cooking and cleaning for her.

At first he didn’t feel welcome in the UK: “I feared the police catching me because my visa had expired. I never went out. I didn’t have any friends. I only had photos of my mum and videos to watch. I was so, so depressed.”

In 2009, a friend recommended an organisation called the UK Lesbian and Gay Immigration Group (UKLGIG), which supports LGBTQI+ people seeking asylum. “Since coming to UKLGIG, I have felt much more welcome. I never found people who have looked after me like they did, from the very first person I met. I was excited to come to the monthly legal meeting to meet other people.”

He says joining the men’s support group has helped him feel less lonely. “We could talk about our feelings, pain, past experiences and dreams. We made friends and I’m still in touch with some of them. Also, chatting on social media, like Facebook. It’s like a dream world – it’s not real. But I have friends from everywhere on Facebook that I chat to.”

Despite feeling lonely in the UK, Adam says he is free to live as gay man. “I feel safe here. In Algeria, I also felt lonely and depressed, but I didn’t feel safe. My life was at risk.

“Since I was a child, my father used to beat me and burn me with a hot knife if I danced with girls or wore make-up.”

His experiences make it difficult for Adam to trust people and he says he still finds it difficult to talk openly about being gay.

“Most of my friends are other people claiming asylum or refugees. I have one close friend who introduced me to UKLGIG, he’s also a gay man from Algeria,” he says. “I haven’t made friends with British people. I had a British boyfriend before I claimed asylum, but I was too scared to tell him that my visa had run out in case he told the police and I was returned to Algeria.

“I didn’t know you could claim asylum on the grounds of being a gay man. Because I couldn’t be open and honest, the relationship ended. He used to say ‘you’re very strange Adam’.”

He says gaining refugee status was the biggest challenge he has overcome since coming to the UK: “It was like waiting to hear if I would live or die. If I wasn’t granted asylum, I knew I would prefer to die than go back to Algeria.”

Now, he says the challenge is overcoming the discrimination he faces as a refugee. He says: “I go for job interviews, but I don’t get offered the jobs because people know I’m a refugee. People think refugees are trouble-makers. I have been working here since 2010, I’ve paid my bills and my taxes. I’ve never committed any crime or created problems.”

Adam taught himself English online and says speaking the same language as everyone else in Britain has helped him feel less isolated.

He works as a sous-chef in a canteen and does other part-time work through an agency. “I dream of getting rid of the label ‘refugee’, having my own flat and a relationship. I’d love to study as well, maybe social work or something to do with people.”

Thanks to UKLGIG for putting us in touch with Adam to share his story for the Jo Cox Loneliness Commission’s spotlight month on refugees.

Refugee Action is a partner of the Jo Cox Loneliness Commission. To mark the Commission’s spotlight month on refugees, we’ve released new research to show learning English is essential to ending loneliness, effective integration and enabling refugees to successfully rebuild their lives. You can find out more here and sign our petition calling on the Government to enable all refugees in Britain to learn English.