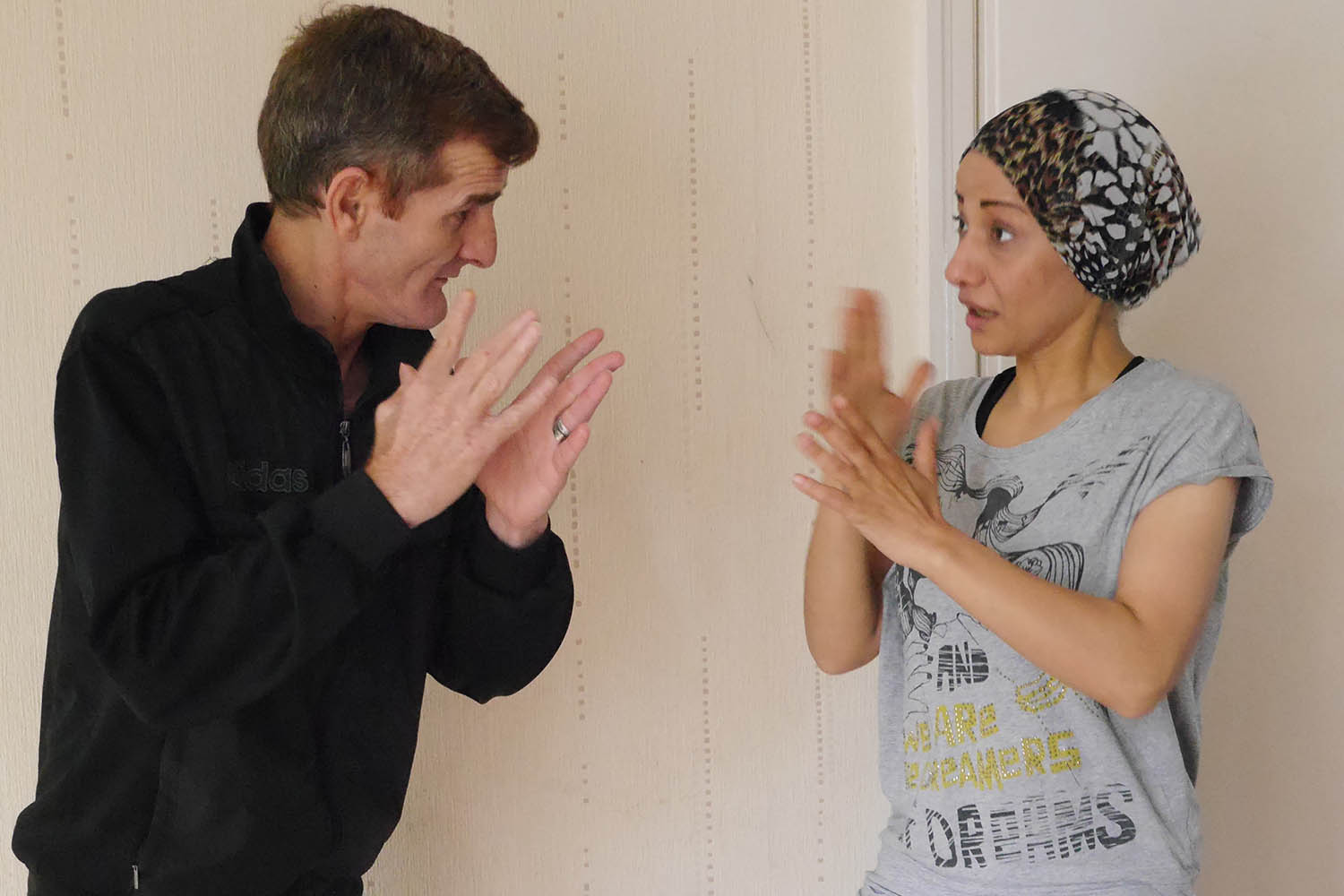 After losing his hearing and speech at a very young age in Syria, Ahmad has always been determined to help others with similar needs.

For years he worked at a centre for the deaf in Aleppo, teaching children sign language to help them better integrate into society. Over time he became a popular and well-respected figure within the country’s deaf community.

“Before the war, life was good. We had money and lived well. I had lots of friends. We used to go out. We used to make videos, like little funny sketches, we used to dance,” says Ahmad. “But when the war broke out, everybody fled to Europe, America and other parts of the world. Some passed away.”

After getting injured in an airstrike that destroyed their home and killed his mother-in-law, Ahmad and his family were also forced to flee. He knew that his life would never be the same again.

Ahmad and his family spent six years in Lebanon, where he says life for disabled people was unbearable. Ahmad was forced to work on the streets of Ba’albek selling tissues and keychains. He would often get beaten up and verbally abused.

He was relieved when he found out that he would be resettled to the UK with his wife and four children. “In England, I feel calm. I can sleep, I can eat,” Ahmad says. “I love my children and I know they are safe here.”

But being far from his deaf community has left Ahmad feeling lost and isolated. “I want to meet people. I want to be able to sign. This would make me feel happier,” says Ahmad “But I can’t find people who can sign in Arabic, and this makes me feel lonely.”

Since arriving in the UK four months ago, Ahmad says he spends most of his time at home trying to reconnect with old friends back home through the internet. And while this has given him some comfort, he says not being able to use British Sign Language (BSL) has been the biggest barrier for him in finding his place in his new home: “Sometimes, I feel claustrophobic. I don’t want to stay at home. But I can’t communicate properly with other deaf people in the UK because sign language is different. It is difficult to learn English sign language.”

This has also left Ahmad becoming more and more dependent on his wife, Mountaha, and others to deal with his children and much of the decision-making. “I used to be very independent and confident. Now, I feel confused. I just want to be able to do things on my own, without any help,” he says.

A Refugee Action caseworker who is supporting Ahmad, is teaching him how to use a simplified version of BSL. The charity has also helped Ahmad join a deaf centre, where he can meet people and learn how to sign in English.

With time, Ahmad hopes that he would be able to learn how to sign in English so he can find work and be able to once again support his family.

“People with disabilities are accepted in the UK. But you must learn BSL to communicate and find your place in society,” Ahmad adds. “I still don’t feel confident enough to work. But with time, I will learn how to sign in English and I hope that one day, I will be able to help other deaf people learn how to sign as well.”