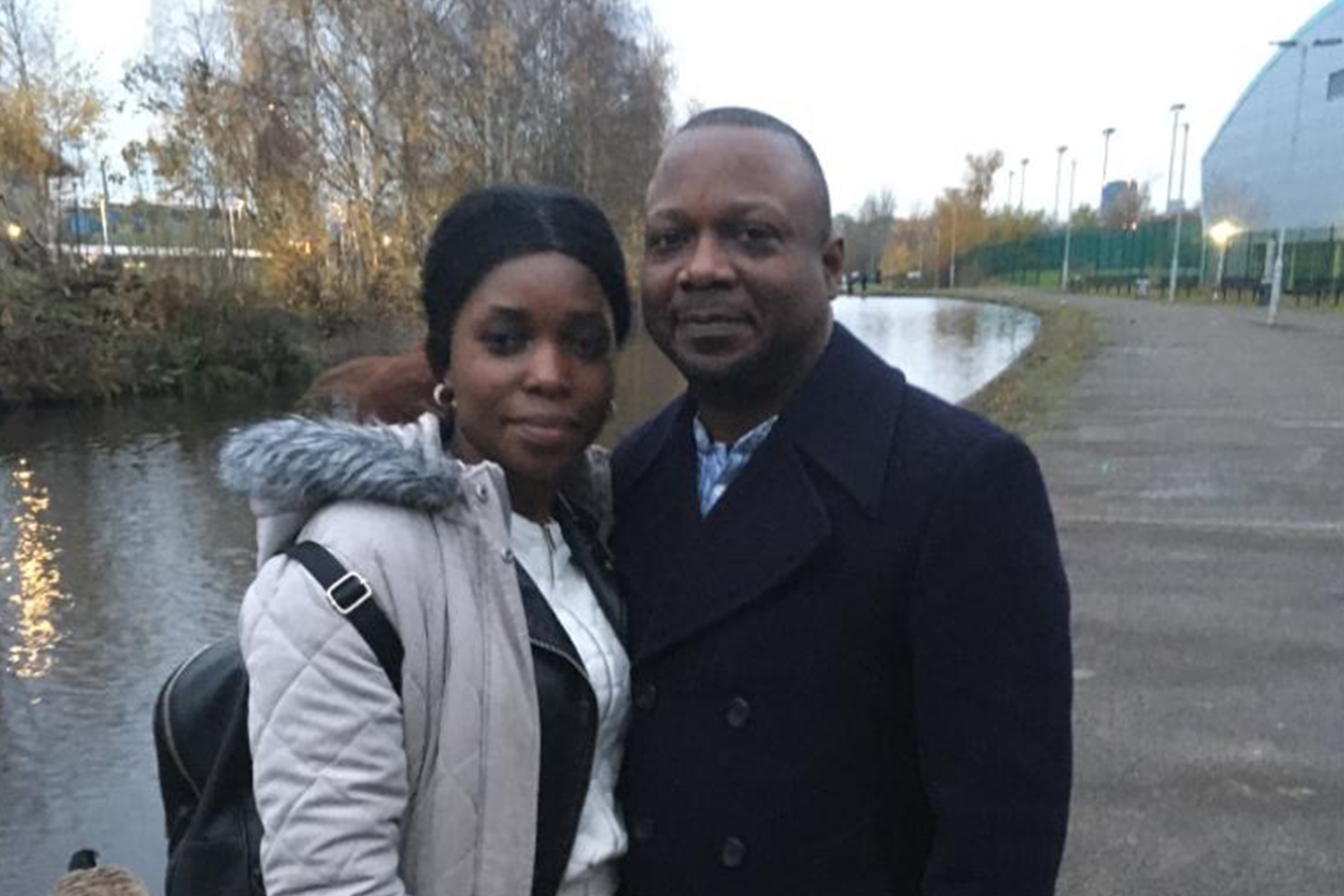 Bruno went through unimaginable suffering in the Democratic Republic of the Congo (DRC) as a result of his activism.

“In 2006, I was a businessman and an activist – I was talking for my people, and I was campaigning for a change in the DRC. After the election we marched because we wanted change in Congo, because of the suffering we went through. Many people died, were tortured, persecuted.”

Bruno was arrested and beaten; his family members threatened. He knew that he had to flee. He had a friend in Zimbabwe who offered to help him.

“When I went to Zimbabwe life was ok, my friend was helping me with a lot of things, and I started to live again.”

Tragically, Bruno’s friend was murdered. Bruno adopted the children that he left behind. “Now I say: ok, my life is in Zimbabwe now because of my children.”

“Then I meet this young girl, Catherine. By the time I meet her, she got my heart. We got married in 2010. We had the two children I adopted from my friend, and another two children who were orphaned who became ours. And me and Catherine, God bless us, we had three biological children. Life was very normal, good.”

Their peace in Zimbabwe didn’t last long. Bruno was unable to renew his residence through his marriage and, one night, he was taken away and imprisoned along with three of their children. Bruno was in prison for six months before he was deported back to the DRC.

Bruno’s cousin told him that the secret service came to the house looking for him. He stayed in hiding, unable to work. He was separated from Catherine and the children for a year.

Through a friend, Bruno moved to a village and began working again. “Slowly, I started becoming a little popular around, helping people with this and that, because it’s my nature. Nothing political, but I was known around as the guy who speaks English. I was writing letters for people, things like this.”

Things were looking up enough for Catherine and the children to join Bruno in the DRC but, sadly, his persecution soon continued.

“The police came and took me away. I was beaten like you would never believe. ‘Is it true that you are informing the Ugandan rebels? They say to us you speak English well.’

“Under the sun, they leave me in a cage. They kept asking me, ‘Tell us, are you an informant or not?’, and I was beaten and had to explain that I don’t know what they’re talking about.

“I came back home, and I was in such a bad situation because of the torture I experienced, something I still suffer with now. I tried to continue my life normally, but there was an investigation and people were behind me, following everything I’m doing. I was so scared for myself and my family.”

“One morning, I was going to see someone, and I left Catherine and the children at home. The police came and they started searching my house. The neighbours joined in and everything was destroyed in the house. Everything.”

For Catherine, it was a terrifying experience, not being able to understand the language and what was happening. “There was nothing to go back to. People just took things from the home, and they started burning the house down.”

“The community are so suspicious. The people Bruno was being associated with, the rebels from the ADF (Allied Democratic Forces, a rebel group in Uganda and the Democratic Republic of the Congo), they had killed so many people. The community wanted answers, they wanted the people arrested.

“Friends and contacts of Bruno urged us to leave immediately, as we were in danger by both the community and the police.”
Bruno and Catherine made the long and difficult journey to the UK, sending their children to Catherine’s mother in Zimbabwe.

“As parents you question everything. Did we do the right thing? Although the children are safe living with their grandmother now, it is unimaginably difficult being away from them.

Despite the kindness Bruno’s experienced, the wait for an asylum decision has been agonising.

“I don’t know how I can tell you about the asylum system. I need a decision, to know if they are accepting us. How I can be with my children, it’s the first goal of my life. They live like orphans without their father and mother.”

“We hope that one day, we can have a place and say: this is home. Our children can dance and be happy. That’s what we’re looking for, just that. A place for our children to dance. I don’t want to be rich, I don’t want a lot of money, just to see my kids. We keep trying, but people are putting us down.

“I was abused all my life. I’ve started feeling it now. These things were abusing things, they became normal.”