When Zeinab saw horrific violence at the tender age of four, she wasn’t quite the same. Her mother, Fatima remembers her being a happy, chatty and cheerful girl, but that all changed when Zeinab was traumatised after witnessing unspeakable acts of terror in Iraq. It affected her so painfully, she suddenly stopped speaking and became completely mute.

Like any loving mother, Fatima was beside herself with worry. She knew Zeinab needed urgent medical assistance and to escape from this hostile environment that was getting worse and worse every day.

Fatima acted fast. She scooped up her youngest daughter Sara and grabbed Zeinab by the hand and fled for their lives.

They arrived in the UK after an exhausting and fearful six-day journey. But life in the UK wasn’t any easier, as they had no money. Fatima applied for emergency support from the Home Office, but struggled to provide for her family for a month until she was finally given £5.39 per day allowance and, with our intervention, granted emergency accommodation.

Thankfully, Zeinab is doing better with the support she is receiving in the UK. Her condition has improved and she has recently been diagnosed as selective mutism. But Fatima is scared she may be forced to leave the UK and the effect it will have on her daughter’s future well-being. She is still waiting to hear about her asylum claim. Fatima has been waiting nearly two years.

During this time, she has not been allowed to work and her family are finding life unbearable because of the meagre amount of money and the dreadful uncertainty around their future. 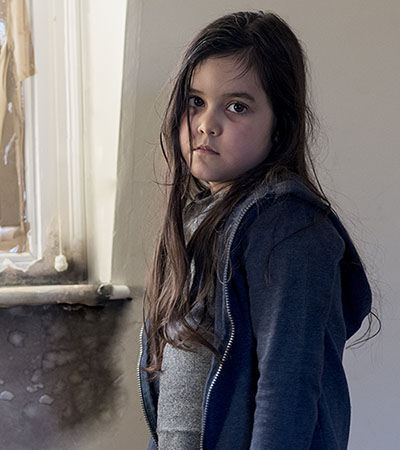 The UK asylum system doesn’t provide the protection and support families like Fatima’s desperately need. Instead the system is forcing people into poverty and hardship.

We need to be there for many more vulnerable families like Fatima’s and provide them with essential supplies and practical support to live with dignity.
Will you be there for them too?

10
could provide essential supplies like blankets, nappies and food, from our destitution fund
26
could train a volunteer so they can provide support and advice for families like Fatima’s
50
could cover the costs for providing shelter, so a family doesn’t end up living on the streets

Your gift today can be the difference between a mother like Fatima having nothing and no-one, to having somebody by her side, every step of the way to a safer life.

To protect the identities of Fatima and her family, names and images have been changed.