This Father’s Day, hear from some refugee dads

Koroush, Abdi, Vianney, Prem, Haider and Rafi are all very different men – with different ages, nationalities and professions.  But they all have two things in common: they’re all fathers, and they’re all refugees. 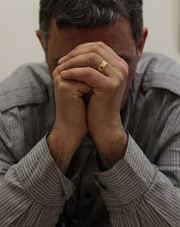 Koroush was a successful businessman in Iran before police harassment forced him to flee.  Caring for his wife and two daughters on asylum support has been a real struggle.

“Children don’t understand these things,” he says.  “My child doesn’t know that we are asylum seekers.  The minimum should be that children are provided for” 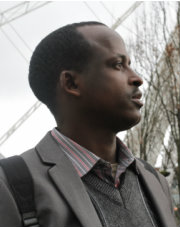 Abdi arrived in Dadaab refugee camp when he was just a child himself.  When he left, having been resettled to the UK, he was a married father.

He remembers his mother telling him not to plant a tree near their home in Dadaab, saying they would soon return home to Somalia.  Years later, “we were sitting under the tree and I said, ‘look, now I’m married and have a child, and we’re using the shade from this tree!’  That made my mother cry”. 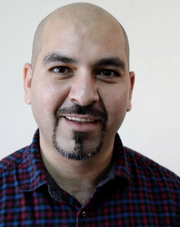 Vianney’s youngest child was born just a few months ago.  He’s also father to a teenage daughter and a young son.

Not being allowed to work is a real difficulty for him, because “when you are working you [can] support your children.  If you are hard-working and you cannot work for a long period, it will be even harder.  It is very stressful when you’ve got a family and you are used to taking care of them”.

Prem grew up in a refugee camp in Nepal, where he married his wife and had two daughters.  Eventually, they were resettled to the UK through the Gateway Protection Programme.

“I had no status in Nepal.  This meant I couldn’t work.  Without a job, I couldn’t build a life for my family,” he says.  “I didn’t want my daughters to live all their lives in a refugee camp”.

As an interpreter for British forces in Iraq, father-of-two Haider’s life was often at risk.  Resettlement to the UK was a new beginning for him, his wife Nadia and their daughters.

“For anybody to change countries, to go and live in a country they’ve never even been to before, it’s hard,” Haider says, but he has no regrets.  “I’m so thankful to Britain.  I had to think of my family”.

Rafi was also an interpreter for British forces.  He worked in Afghanistan, and fled to the UK after receiving death threats.

“My dream was to secure a future for myself and my family in a safe country,” he says, “but the most difficult and devastating time of my life started.  All I want is safety for my family.  I just want us to be reunited so we can enjoy a brighter future together”.