Highlights from our partnership with the Jo Cox Loneliness Commission 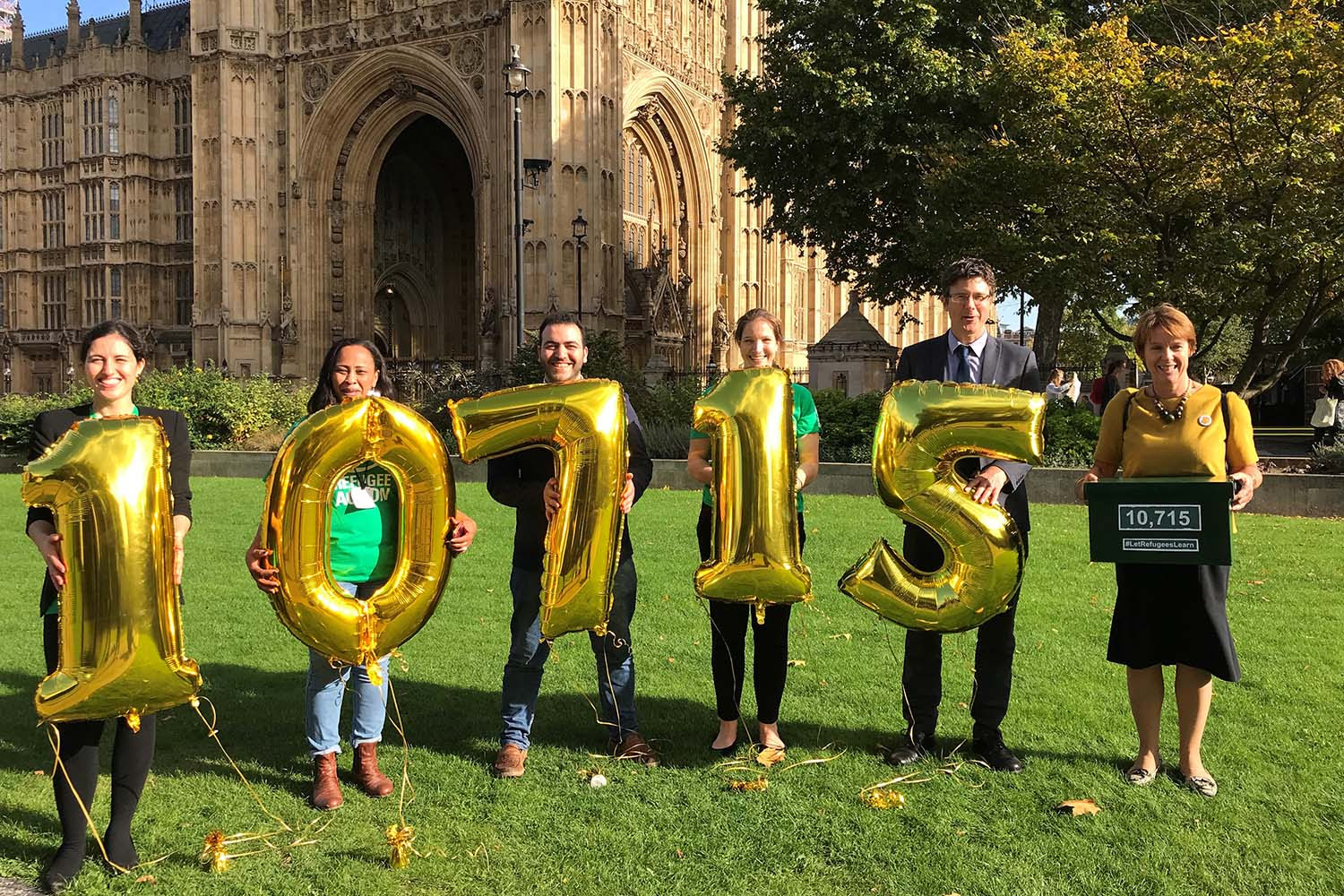 Refugee Action’s chief executive Stephen Hale looks back at an incredible month of putting English lessons for refugees in the spotlight and to the top of the Home Secretary’s in-tray.

“There is no chance of integration without English” – is how Ana Astiana, a Refugee Action volunteer and asylum seeker, brilliantly and succinctly summed up the need for government investment in enabling all refugees in Britain to speak English.

Ana was speaking at our event in Parliament to an audience of MPs from all parties, including the Home Secretary Amber Rudd and the Shadow Home Secretary Diane Abbott, to mark Refugee Action’s partnership with the Jo Cox Loneliness Commission  for its spotlight month on refugees.

Along with Nour Al Baarini, she articulated perfectly why English is essential for integration. She also spoke movingly about the stigma and loneliness that can be felt by people seeking asylum, especially when they cannot understand what’s being said around them.

The Home Secretary went on to speak about the importance of enabling refugees to learn English and made a welcome commitment that the Government planned to do more to tackle the issue.

The event saw MPs from all the main parties attend and have one-to-one conversations with Nour, Ana and others about their experiences. It also drew to a close what has been a fantastic month of campaigning, with refugees and asylum seekers speaking out about loneliness and the value of a shared language. Here are some of our highlights:

The month launched with media coverage featuring Syrian couple, Mountaha and Ahmad, who are supported by our resettlement team in Birmingham. We worked closely with the Independent on this video piece, which details how we’re supporting Ahmad, who is deaf, to learn British Sign Language so he can communicate and feel part of the UK’s deaf community. His wife, Mountaha, speaks about how isolated the couple feels and her determination to learn English so she can start contributing to their new community.

Farid, a former child refugee who is now studying social work at university in London, spoke to the BBC about his experiences learning English with the help of Eastenders! It was difficult to learn, but sharing a language with his classmates helped him feel less lonely and find common ground at school.

Our friends at UK Lesbian and Gay Immigration Group put us in touch with Adam who shared his emotional journey as a gay man claiming asylum in Britain. He was granted refugee status in 2010, but still describes living a “half-life”, saying: “I feel lonely because I can’t get a good job, I can’t get my own flat to start building a relationship. When you don’t have a partner, don’t have children, you don’t have a life. I’m in my 40s and sometimes I feel it’s too late for me to have a relationship.” The prejudice and persecution he faced, growing up in Algeria, mean that he still struggles to speak openly about being gay and finds it hard to trust people. But with support from UKLGIG he says he feels less lonely and hopes to study social work.

Real-life testimonies helped us bring to life the findings of our research showing the heavy toll that years of underfunding of English language lessons has taken on provision across England. Our survey of 71 providers of English for speakers of other languages (ESOL) found the majority (63%) are concerned they cannot provide enough classes to meet people’s needs.

Almost two thirds (65%) of the providers, which account for more than 35,000 ESOL learners, said they have a waiting list. Of those nearly half said people are waiting for an average of six months or more to start learning. One said it could take three years to be assigned a course and another said the wait could be “indefinite”.

Clearly this isn’t good enough. Refugees are determined to learn English, but face huge barriers from unacceptably long waiting lists to a total lack of childcare in most areas.

We also worked with partners, including Migrants Resource Centre, women’s support group Xenia  and Leeds Survivor Led Crisis Service, to bring together refugees and asylum seekers for a series of focus groups around the country. Participants bravely shared their experiences of loneliness and isolation. Many told us that learning English, along with the support of voluntary organisations, have been vital in reducing their feelings of loneliness.

You can read about our findings and their experiences in our briefing Safe but Alone.

It feels like there is a real energy and momentum behind the importance of enabling all refugees in Britain to learn English. We need to ensure this continues as the Government is due to publish a new integration strategy in the coming weeks.

For now, the issue is well and truly on the agenda. Dame Caroline Spelman, the Conservative MP for Meriden, secured a Westminster Hall debate on teaching English to refugees. The morning of the debate, she set out the case for investing in English to bring communities together in this joint comment piece with Nicky Morgan, chair of the Treasury Select Committee and Conservative MP for Loughborough, in the Times.

MPs from all parties spoke supportively about the need to invest in ESOL for all refugees in Britain. The Immigration Minister Brandon Lewis fully acknowledged the importance of English for refugees’ integration, and agreed that the Government needed to do better to improve access to English language lessons.

At the start of the month at the Conservative Party Conference, we joined forces with the British Red Cross to hold an event on loneliness and integration among refugees and people seeking asylum in Britain. Chaired by Neil O’Brien MP and with strong support from Loneliness Commission co-chair Seema Kennedy MP, everyone at the packed meeting was visibly moved – and many brought to tears – by the personal accounts from our two speakers on their experiences of loneliness.

Finally, after our event in Parliament last week, we handed in our Let Refugees Learn petition – with a whopping 10,715 signatures – to the Government. Here our campaign champion Nour talks about what it meant to him:

We asked Nour, one of our amazing #LetRefugeesLearn ambassadors, how it felt to be handing in more than 10,000 petition signatures: pic.twitter.com/WKLqDDOnOb

There is a lot of support for this issue right now, however, without the commitment of extra funding, tens of thousands of refugees will remain stuck on waiting lists, isolated and unable to fulfil their dreams and contribute to their new communities and our economy.

We’d like to say a huge thank you to our all supporters who have signed our petition and liked, shared and retweeted our content this month.

A special thanks to all our partners who have supported the Jo Cox Loneliness Commission’s spotlight month on refugees by sharing and creating content, holding events and supporting our focus groups. In particular, Freedom from Torture contributed this moving comment piece from a refugee and torture survivor to Politics.co.uk, Leeds Survivor Led Crisis Service held a local ‘Start A Conversation’ event attended by co-chair of the Commission Rachel Reeves MP, Ben & Jerry’s published this blog about our research and supported local groups across the country to hold ‘Start a Conversation’ events to mark the month. NATECLA members contributed to our survey of English language providers, and Xenia, Migrants Resource Centre, Eden Communities Project, UKLGIG and the British Red Cross have all supported activities throughout the month.

Finally, many thanks to the Jo Cox Loneliness Commission and co-chairs Rachel Reeves and Seema Kennedy, for supporting us and making the spotlight month on refugees a great success.