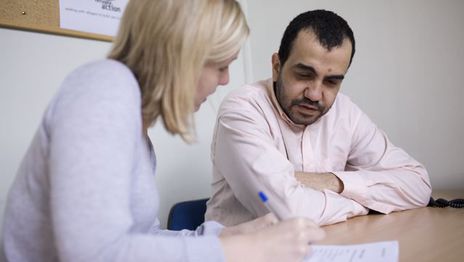 The lives of people seeking asylum are being put at risk as they are denied justice due to drastic cuts to legal aid, new research by Refugee Action finds.

A fall in providers of more than half over the past decade has left ‘legal aid deserts’ where asylum applicants are missing out on vital representation for life and death cases.

Restrictions to legal aid introduced in 2012, along with changes to how solicitors are paid for legal aid work in 2006, mean that people seeking asylum are too often finding it impossible to access the legal assistance they need to make their case for protection from violence or persecution.

For its report, Tipping the Scales: Access to Justice in the Asylum System, Refugee Action mapped legal aid provision across England and Wales using data from the Legal Aid Agency. The findings reveal ‘legal aid deserts’ across the country:

Earlier this year, Refugee Action and NACCOM (the No Accommodation Network) surveyed 92 organisations about their experiences referring people they work with to legal aid funded immigration solicitors:

Naveed* fled Pakistan after his family disowned him because of his sexuality. As a gay man his life was in danger. He came to the UK with no prior knowledge of the asylum system and struggled to find information about the process.

When he received a letter inviting him for his asylum interview in 10 days’ time, he felt panicked because he did not have a solicitor. He visited four solicitors before finally finding someone who could represent him.

“By the time I found my solicitor, I didn’t have much time left to understand everything and to prepare for the interview,” Naveed says.

His case was initially rejected because, although the Home Office recognised that he would face persecution as a gay man in Pakistan, they did not accept that he was gay. He says he didn’t feel comfortable talking about his sexual orientation. Ahead of his appeal hearing, his solicitor had more time to gather evidence and give Naveed the confidence he needed to speak out.

“My solicitor encouraged me to speak up. She helped me a lot,” says Naveed, who was granted refugee status on appeal.

“I feel so much more secure now. I am living in a country now where I can just be myself and live openly. There is a law that allows me to live freely. I am relaxed now. I feel safe now.”

“However, our research shows that drastic cuts in legal aid provision are tipping the scales of justice and putting lives at risk. The Government must act now to ensure the legal aid system is fit for purpose.”

Refugee Action and NACCOM are calling on the Government to carry out a comprehensive public review of current legal aid provision, with a focus on the availability of essential legal advice to people in the asylum system.

“For those in the asylum system, being able to access legal advice can mean the difference between being sent back to a country where they face certain death or being given the opportunity to live safely in the UK.”

For more information and interviews contact Jenna Pudelek in the Refugee Action press office on 07771748159 or email JennaP@refugee-action.org.uk.

*Naveed is a pseudonym to protect his identity.

Refugee Action’s report, Access to Justice in the Asylum System, is available here.

The Legal Aid, Sentencing and Punishment of Offenders (LAPSO) Act 2012 resulted in significant cuts to legal aid, including all areas of immigration law expect for asylum. A 2017 review of the impact of LAPSO by the Law Society found the legislation is excluding many vulnerable groups from free legal advice and “many of those who are still eligible for legal aid are no longer able to access advice in their local area”.

The Graduated Fee Scheme (GFS) for legal aid was introduced in 2006 and funds legal representation for individual ‘units’ of work, as opposed for payment at an hourly rate as had previously been the case. The GFS has meant that solicitors often do not have the time they need to spend on an asylum applicant’s initial decision. People claiming asylum are often in highly vulnerable situations and it may take time before they feel comfortable disclosing distressing, highly personal experiences to a stranger. This can have a disproportionate impact on women who may have experienced domestic violence, rape, forced marriage and female genital mutilation.