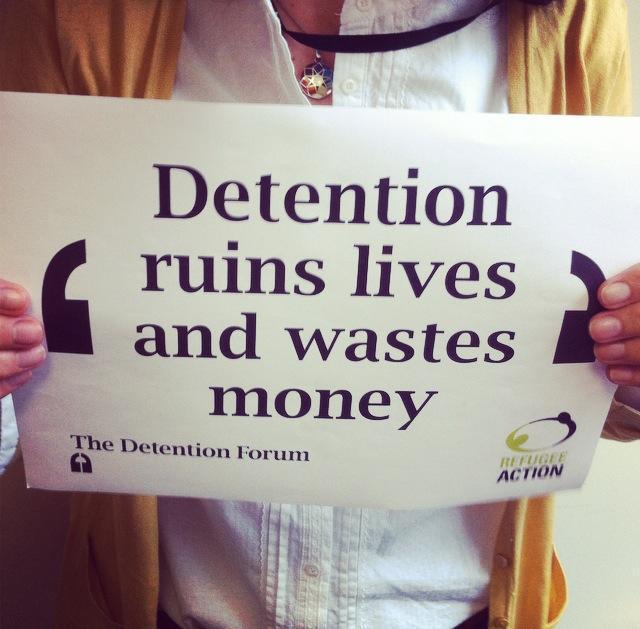 Salma is a caseworker at Refugee Action.  Until April 2014, she worked with immigration detainees.

We’re sharing her diary of a typical week in detention (originally published in Third Sector) as part of the Unlocked Campaign – calling for an end to indefinite detention in the immigration system.

Today our partner organisation from Pakistan is visiting, who provide support to people once home. We meet about 50 Pakistani detainees, then move on to people who’ve already applied to return. Many are waiting for travel documents to be issued and flights to be booked. It’s an agonising wait for people desperate to escape detention and get back to their families.

Tuesday: This morning I work from home on queries raised yesterday. Then it’s a dash to St Pancras for the train to Dover, where we run an advice surgery at the removal centre.  Today it’s grey, windy and drizzly, but on a clear day we can see France.  At the centre, detainees of all nationalities approach us cautiously; some about returning, others just desperate to talk to someone new. Depression is common; I’ll sometimes meet someone perky, but as the weeks pass their demeanour changes. It’s sad. I try to build a good rapport with those I meet; they tend to be lovely people considering all they’ve experienced.

Wednesday: To Harmondsworth IRC, again with our partners from Pakistan. I complete applications for asylum seekers and irregular migrants.  I’m also approached by an Israeli conscientious objector, an extremely frustrated Nigerian detainee, and a man who believes he’s been unlawfully detained. I refer him to Bail for Immigration Detainees and plan to follow up the other cases later.

Thursday: Finally, a day in the office! With two days’ worth of cases to follow up, there’s a lot to do. There’s also a risk assessment to carry out for a man who wishes to return to Sri Lanka. With several human rights organisations suggesting Sri Lankan returnees are at risk of ill treatment and even torture, it’s my responsibility to make him aware of the security risk.  It’s important he’s in a position to make his own informed decision about whether or not to return.

After work some colleagues and I go to the cinema to watch a film about a young person who is forcibly removed to Afghanistan. It’s sobering viewing; particularly as I’ve met boys like him in detention. It depresses me that young people are forced back to dangerous places on their own.  They’re still children, regardless of being 18.

Friday: A farewell lunch for a colleague brings much-needed cheer at the end of the week. Refugee Action is a very multicultural workplace, so the spread of food is impressive!

There’s no better antidote to the suffering we see than downtime with colleagues. I reflect on the people I met this week.  So many are desperate to return – but bureaucratic delays leave them languishing in detention.  It just doesn’t seem right.

To join the call for a time limit on immigration detention, visit the Unlocking Detention website.