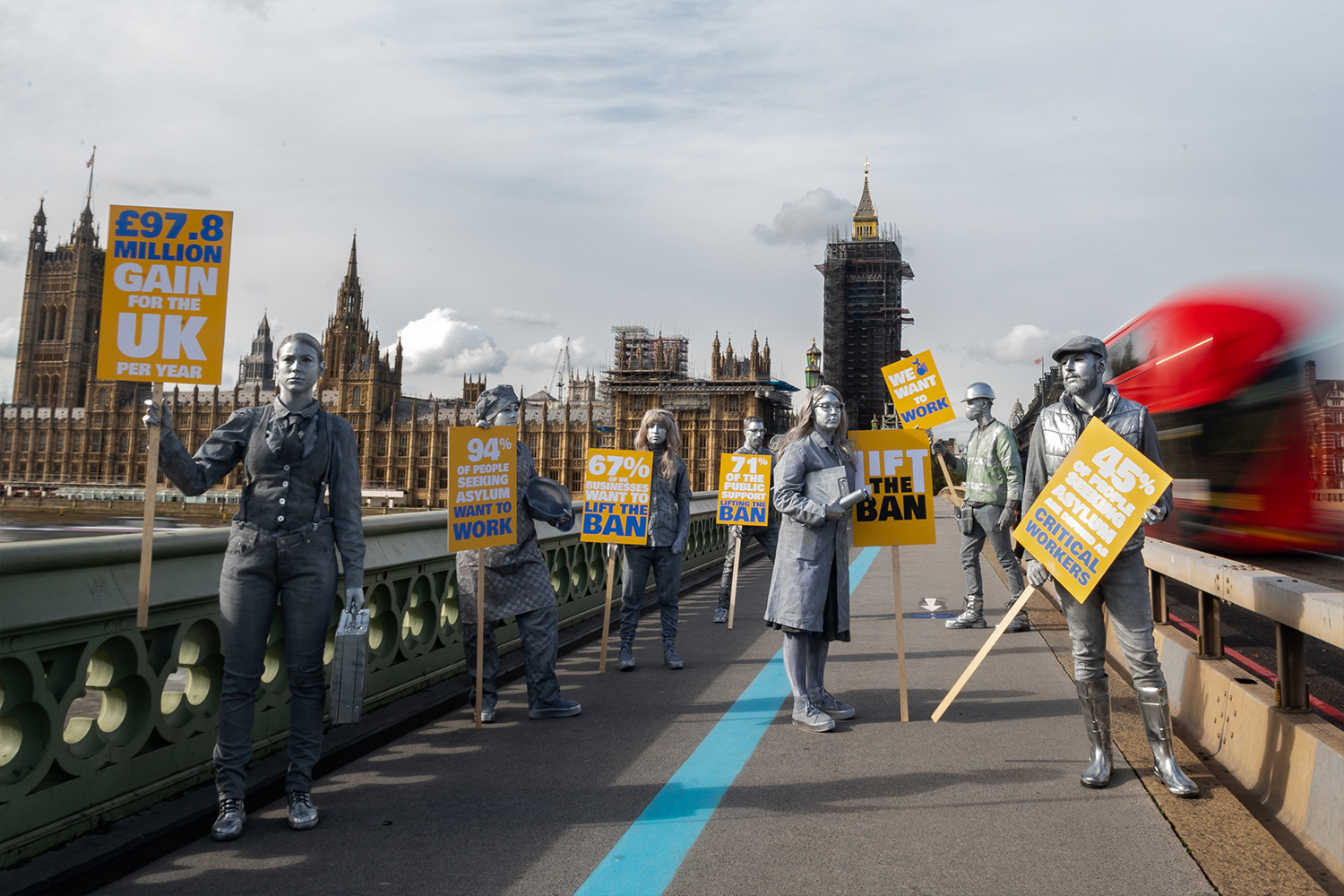 MRP polling of more than 8,000 adults carried out by Focaldata on behalf of the Lift the Ban Coalition revealed an estimated 70 percent of voters in the Home Secretary’s seat would support lifting the ban.

It was a similar result in Prime Minister Boris Johnson’s constituency of Uxbridge and South Ruislip, where 71 per cent of voters favour change.

The MRP model suggests that voters represented by other Cabinet members also back letting people seeking asylum work, including:

Move could save taxpayers £181 million

Furthermore, new research carried out by the Lift the Ban coalition – which includes businesses, economic think tanks, recruitment firms, trade unions, refugee organisations and faith groups – estimates increased income tax and National Insurance on top of fewer asylum support payments would mean savings of about £181 million per year.
However, the savings could be as much as £650 million per year.

People seeking asylum are effectively banned from getting a job while waiting for a decision on their claim – which often takes years – and instead must exist of a meagre government allowance of just £5.66 a day, which causes destitution and declining mental health.

People can apply for the right to work after 12 months but are restricted to a small number of roles on the Government’s Shortage Occupation List, which includes jobs such as classical ballet dancer and hydrogeologist.

At the end of June 2021, 54,000 people had been waiting more than six months for a decision on their initial asylum claim. It is the highest number since records began and a 39 per cent increase on the previous year.

The MRP polling estimates revealed that giving people seeking asylum the right to work was popular with voters who live in so-called “Blue Wall” and “Red Wall” constituencies.

In the Blue Wall, Conservative held seats that voted remain in the referendum and have a higher proportion of university graduates, 75 per cent of people thought people seeking asylum should be allowed to work. This includes 76 per cent in Liam Fox’s Somerset North seat and 75 per cent in former PM Theresa May’s Maidenhead constituency (full list in notes to editors).

In Chesham and Amersham, where in June the Liberal Democrats won a by election after securing a 30 per cent swing from the incumbent Conservatives, 76 per cent of voters supported the right to work for people seeking asylum.

In constituencies that swung from Labour to Conservative in the 2019 General Election and have a majority of less than 10 per cent, a group that features many of Labour’s former “red wall” seats, polling showed support from 69 per cent of people. This included 73 per cent of voters in High Peak, in Derbyshire, and 73 per cent in Colne Valley, in Yorkshire (full list in notes to editors).

The Lift the Ban coalition is calling on the Government to give people seeking asylum the right to work after six months from making their initial claim.

According to the coalition, lifting the ban on people seeking asylum working is common sense because:

Annie, from Trinidad and Tobago, first claimed asylum in the UK in 2010. She said:

“Not being allowed to work as an adult is demeaning, degrading. It’s like being in a mental prison with no shackles.

“These results show that when it comes to giving people in our asylum system the right to work, Priti Patel, Boris Johnson and Cabinet Ministers are badly out of step with the British public.

“It’s now three years since the then Home Secretary stood up in Parliament and promised a review into the right to work. The Government must stop dragging its feet, listen to voters and businesses and end this senseless ban once and for all.”

“People who flee to the UK in search of safety should be supported to rebuild their lives, not prevented from doing so.

“It makes no sense for the Government to stop people from using their skills to play a full part in society. This polling confirms that the UK public agrees.

“This misguided, unpopular policy has done enough harm, it’s time to lift the ban and give people seeking asylum the same opportunity we’d all want for ourselves.”

Focaldata collected data from a representative sample of 8,149 GB adults between 8-13 September, and then performed MRP to derive constituency-level estimates. The constituency estimates have a confidence interval of +/-4 percentage points. MRP stands for Multilevel Regression with Post-stratification. This technique allows you to model an area’s likely attitude on a particular issue based on the demographics of the people who live there. It correctly predicted the outcomes in the 2017 and 2019 elections. The MRP model uses a range of individual and constituency level variables. These include (but are not limited to) age, gender, education, votes at previous elections (2019 General and EU referendum), population density, GE2019 vote share. We include several interactions to the above as well.

To calculate the cost-benefit we looked at annual contributions from National Insurance (NI), income tax and savings from asylum subsistence support. For all but the high-end estimate (£650.6 million), we did not include annual savings in relation to the cost of asylum accommodation (£6,720 per person). The latest immigration statistics (published 26th August for the year ending June 2021) show that 80% of people seeking asylum are aged 18-69. As such, we estimate 43,000 people waiting more than six months for a decision on their asylum claim are 18-69 (out of a total of 54,040 currently waiting more than six months). For national average wage, the taxable income would be £17,902 at 20% tax rate, equalling annual tax of £3,580.40. For the same earnings, NI of 13.25% would give an annual payment of £2,770.04. Annual savings per person on asylum support (£39.60 per week) would be £2,059. Throughout, we calculated full-time as 36 hours per week.